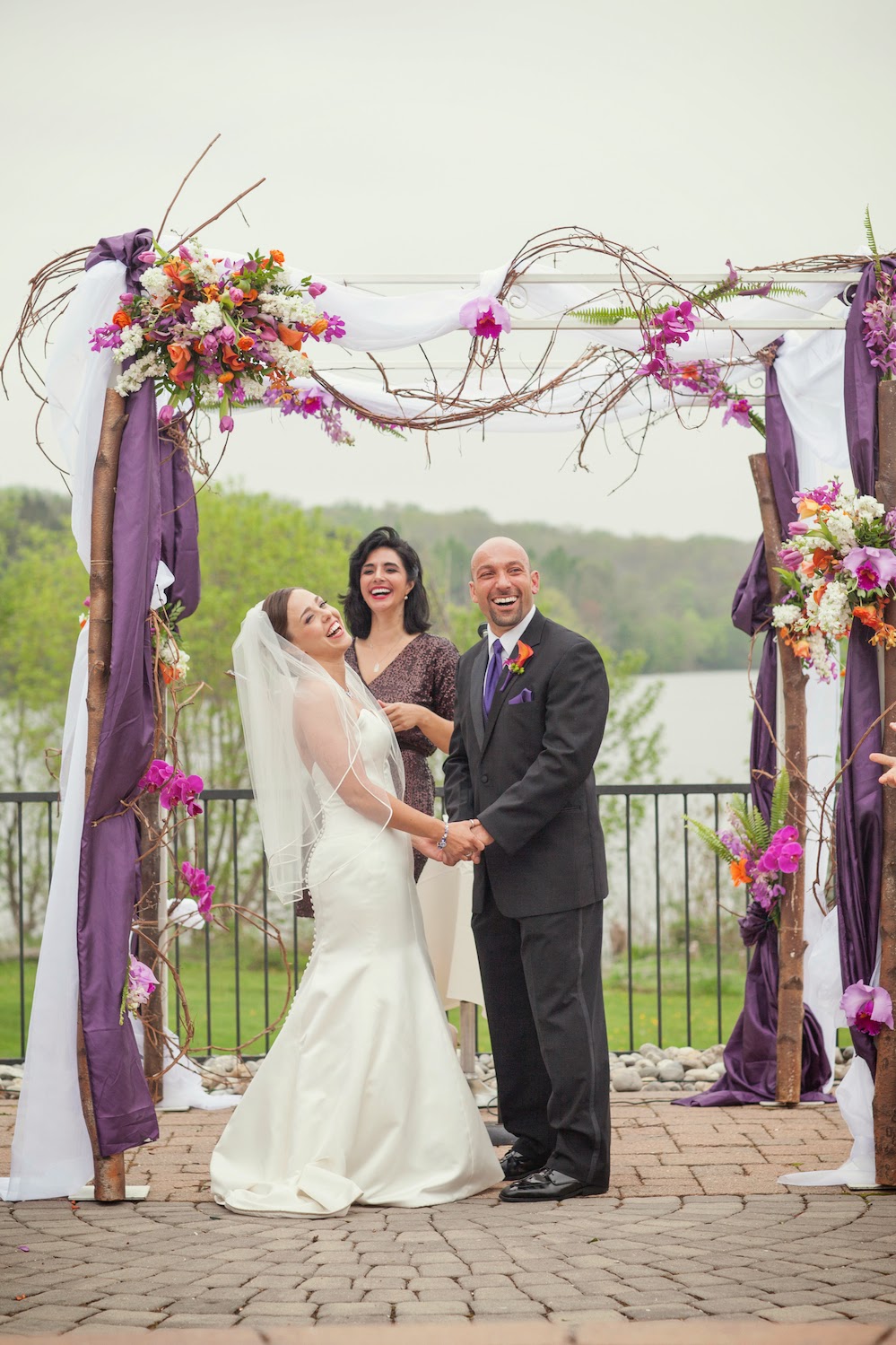 This spring, Erman and Lori tied the knot at the scenic Lake House Inn in Perkasie, PA.  A warm, fun-loving and good-natured couple, they inspired me to tell their ceremony love story like I’ve never done before--in the style of a fairytale. Delighted by the story, many of their guests asked the newlyweds for copies, so here it is--Erman and Lori’s modern day fairytale as told in their wedding ceremony moments before they exchanged vows, warmed-rings, and a honey kiss… 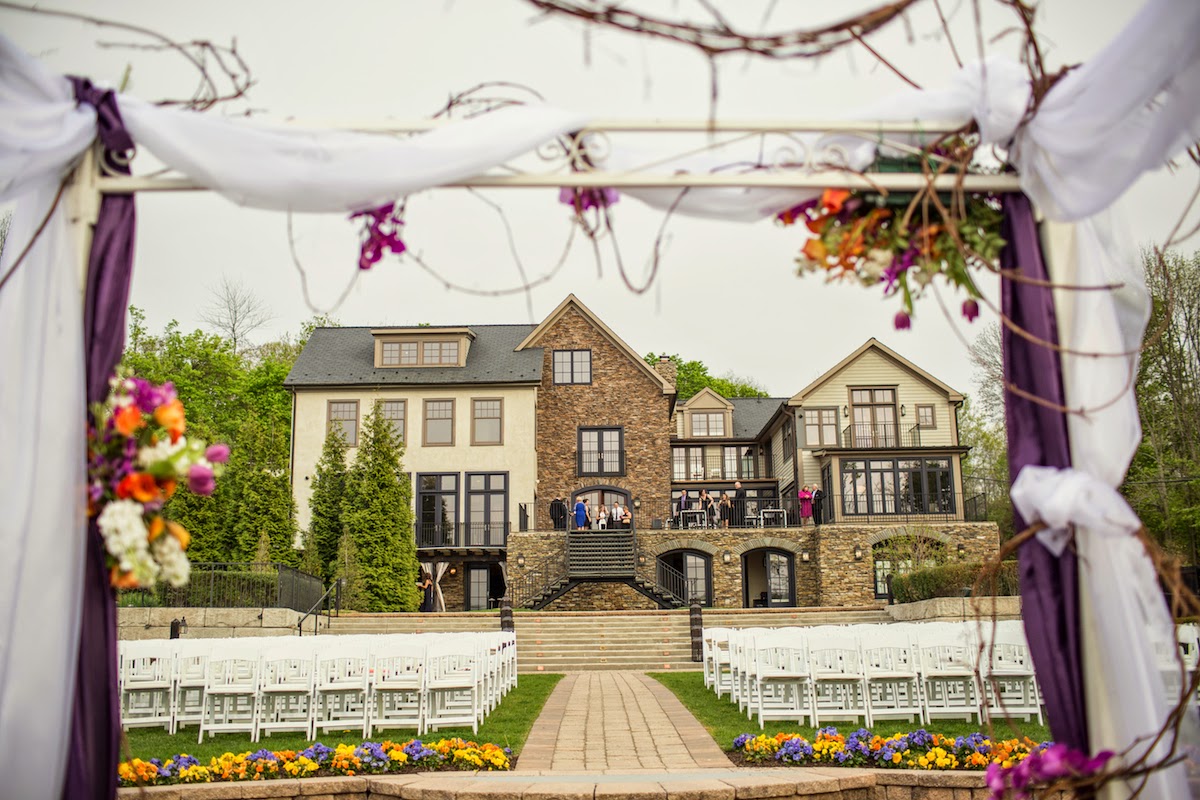 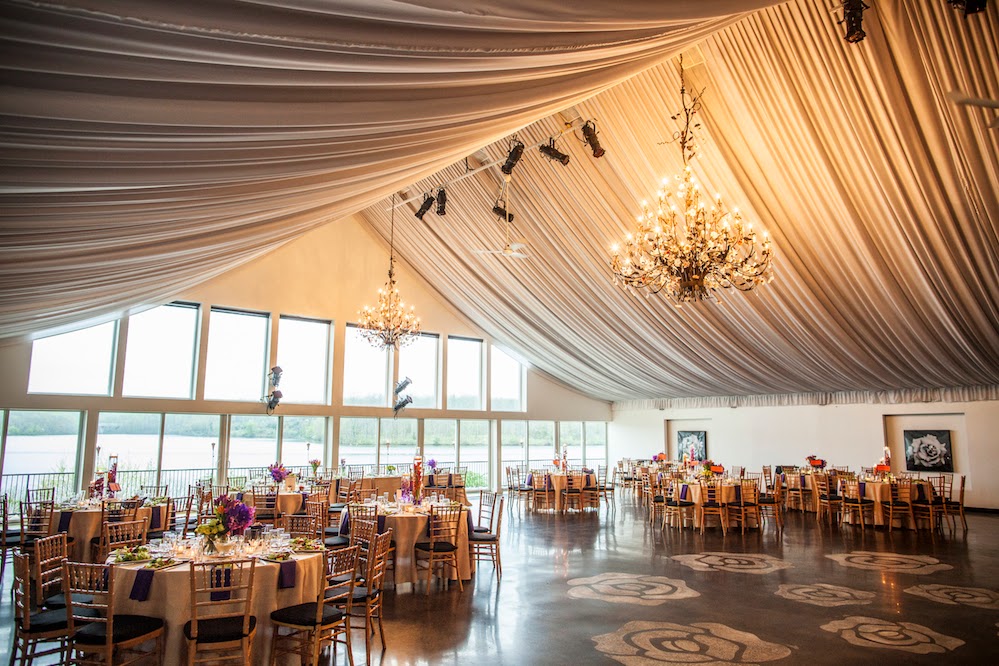 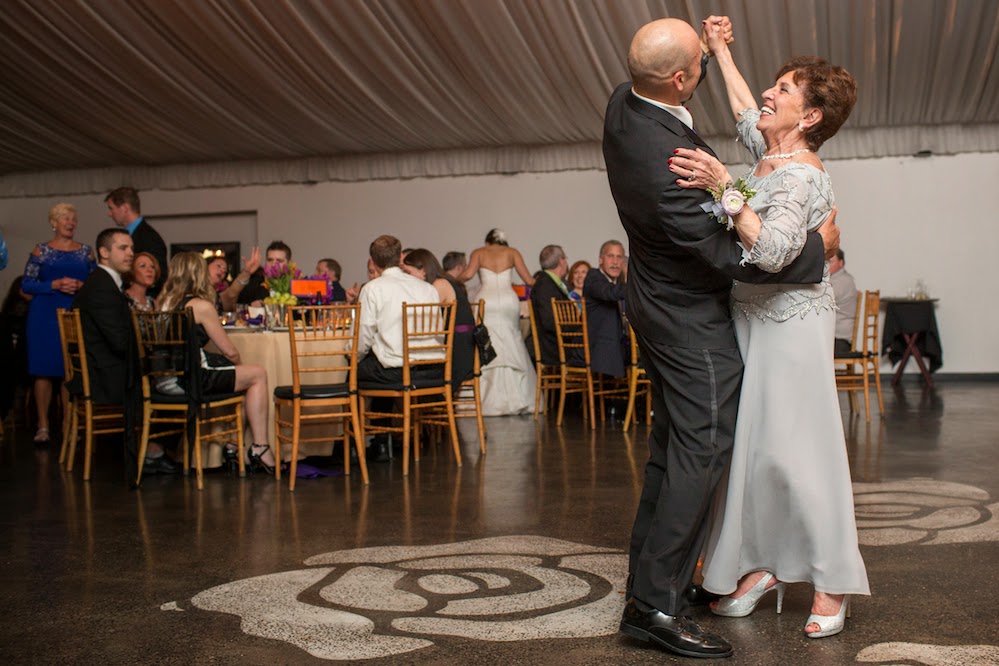 "Once upon a time, The Hotel Bethlehem threw a ball to celebrate a new year in the kingdom. It was at this festive party, that a dashing prince named Erman first saw the most beautiful maiden from across the room, our hero just knew that he had to meet the mysterious beauty before the clock struck midnight. 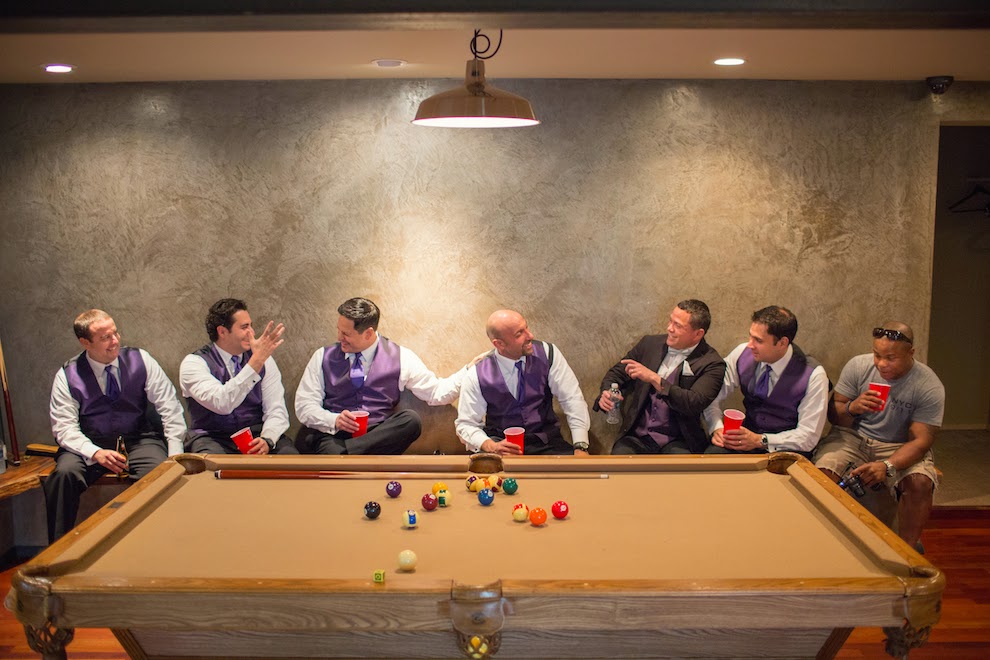 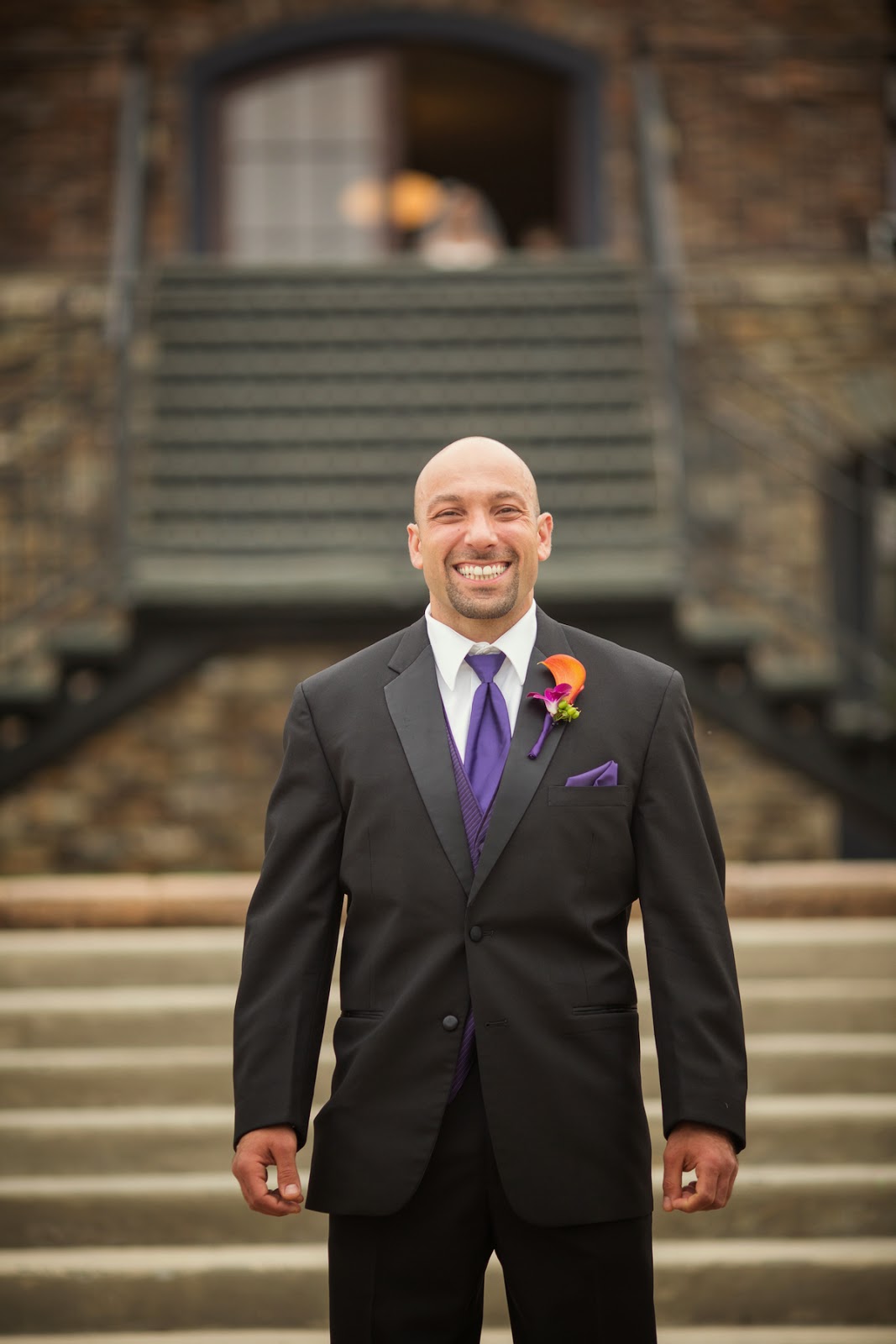 In their fairytale, the beautiful princess arrived at the ball, looking elegant in her gown and high heel shoes. She was fashionably late of course. The Princess Anastasia, for that is what she called herself when she was out of her castle (so she could remain disguised to suitors unworthy), wanted to partake in the Kingdom’s magical love potion, called a “cosmopolitan”.

Through feats of bravery and directness, Princess Anastasia was able to finally secure the precious potion for herself in a glass vessel, while her friends cheered from the other side of the ball. But before she could drink of the potion, and return to the safety of her ladies in waiting, a mischievous magic carpet came to life and grabbed ahold of Princess Anastasia‘s heel, sending her body forward. But would she spill the potion? 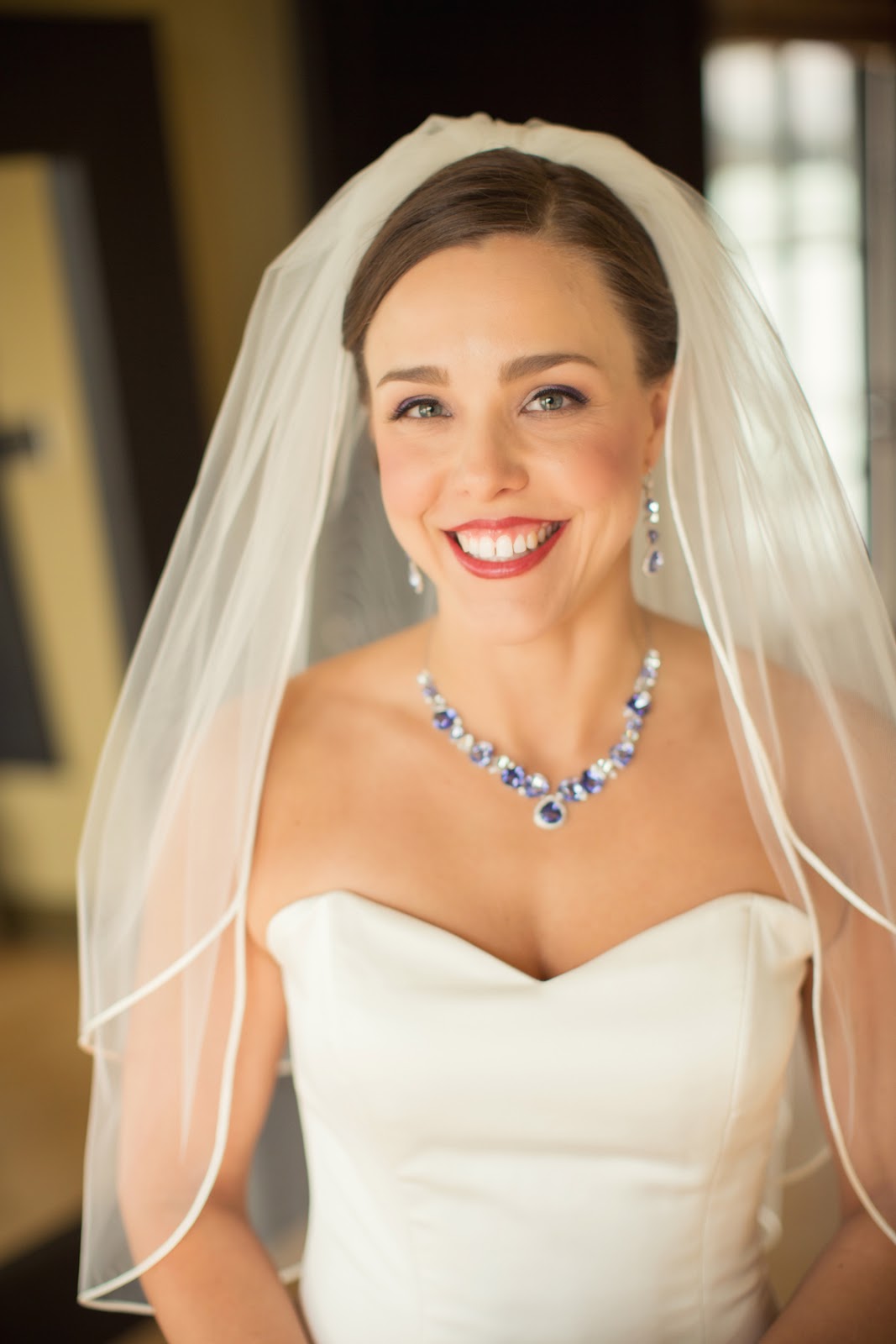 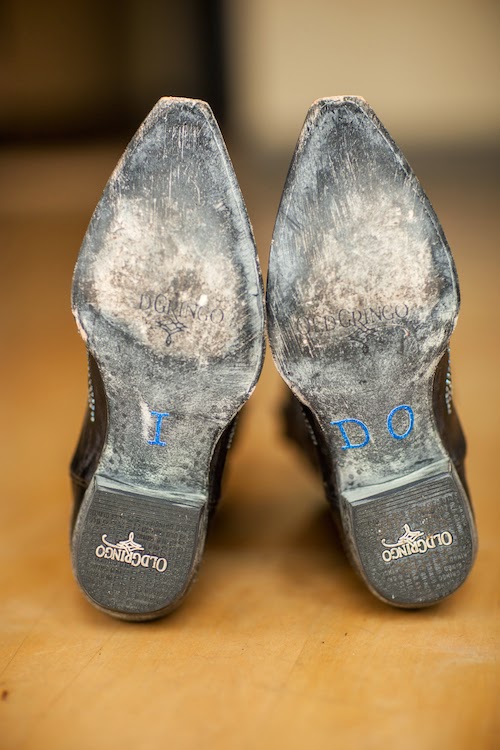 The handsome prince, who had been watching the lovely princess from the moment she had arrived at the ball, had been impressed with how she bested the Kingdom’s Keeper of the Potions so swiftly to secure the delicate glass vessel. And now, this moment, the test of physical feat as well as character—The prince watched in amazement as the princess, snared by the trap of the carpet, tripped, “almost fell flat on her face and magically avoided spilling her cosmopolitan!” He was impressed.

The princess, embarrassed but also impressed with herself, looked around to see if anyone had seen her misstep, she saw the prince then for the first time. He was smiling at her. She smiled back. Then she returned to her ladies in waiting.

The prince was captivated by the princess and waited for just the right time to make an introduction. When the prince and princess finally found themselves face-to-face on the dance floor, the princess still was in disguise. “I’ve never seen anyone with as much grace, charm and flexibility” said the prince, “I must know who you are. What is your name?”

“That is not your name!” The good-natured prince had burst out laughing, and it surprised the princess for no one had ever seen through her disguise before.
After the prince proved the seriousness of his intent—he danced with the princess throughout the night, made introductions to her friends, brought her more potions, the princess was finally ready to reveal herself to the prince. She said, “My name is Princess Lori." But before she gave the prince all the details to her castle, she warned him, “Whatever you do, you must never text me.”

Oh, our poor prince, perhaps under the influence of too much magic potion himself, disregarded Princess Lori’s warning. He couldn’t get the captivating princess out of his head and sent a text at 4:30 in the morning. And just like that, a spell was immediately cast that made it impossible for either to see the other.

Then one day, after several weeks had passed, the princess was reminded of the powerful charm of the prince’s smile at a chance encounter. Second chances were given and spells broken when the prince picked up the telephone to ask Princess Lori out on a sushi dinner date. From that moment on, “the rest” Erman says, “is history.” 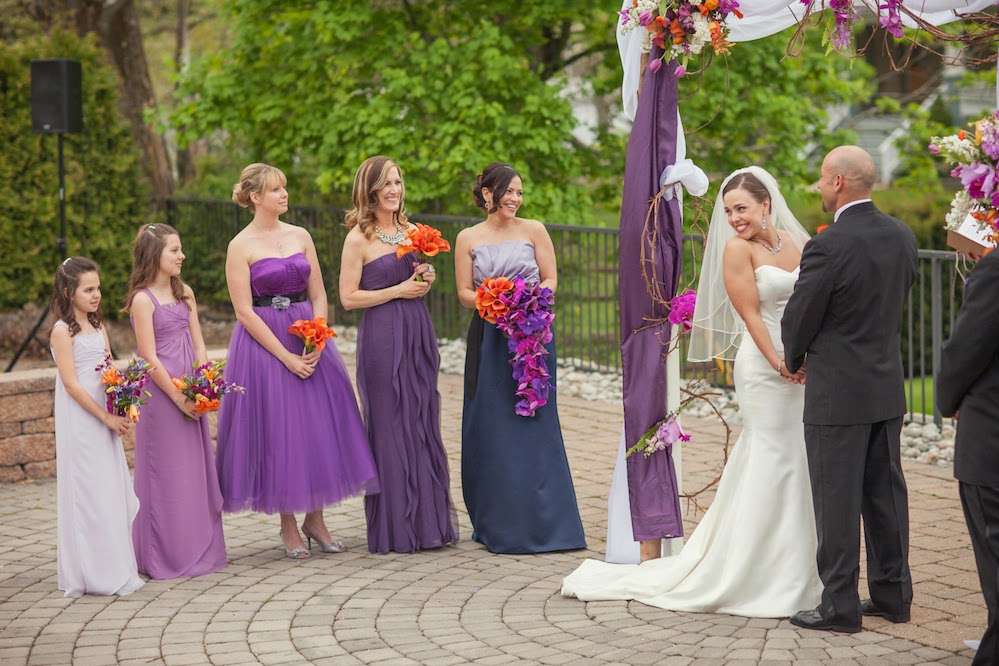 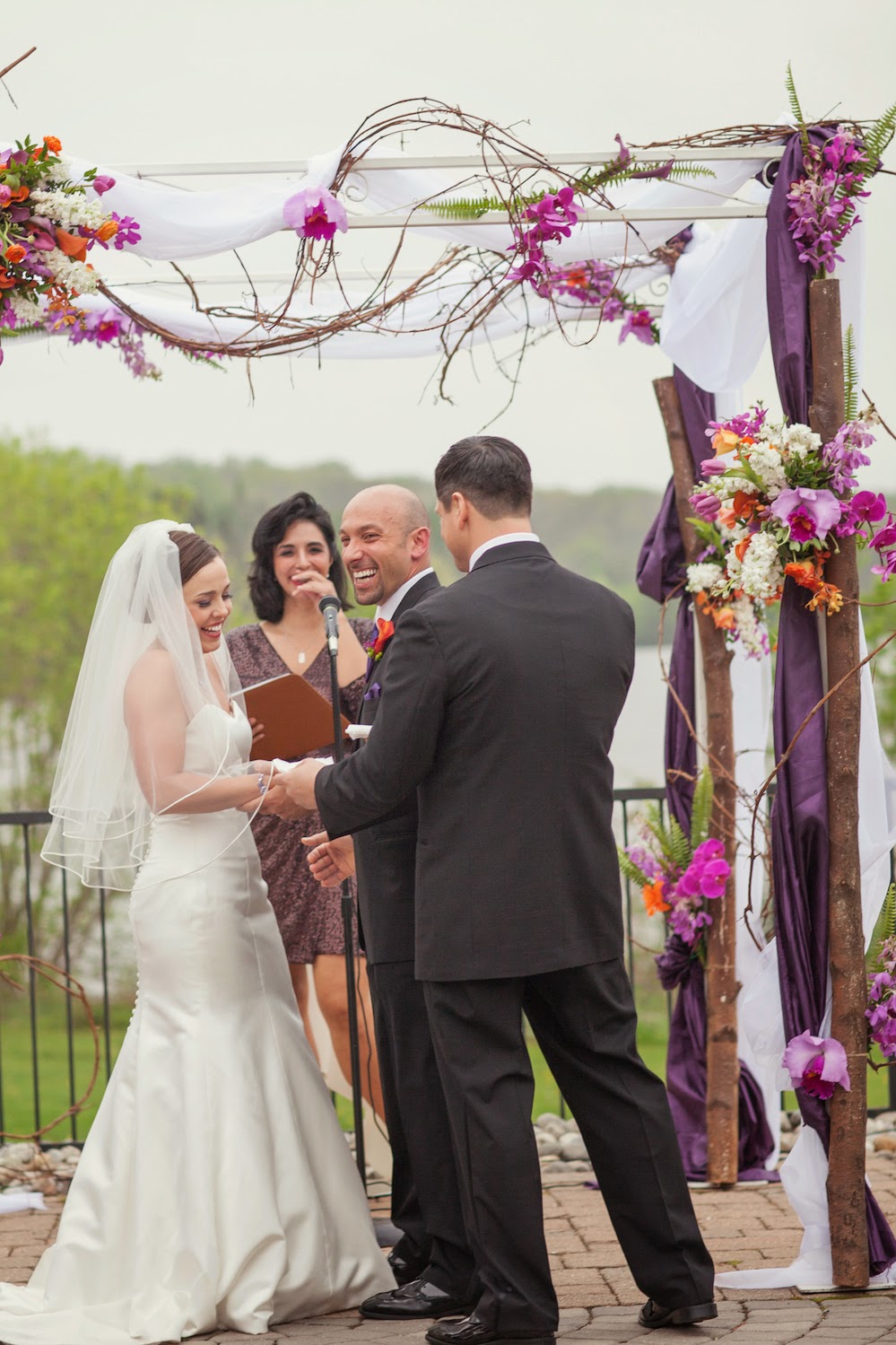 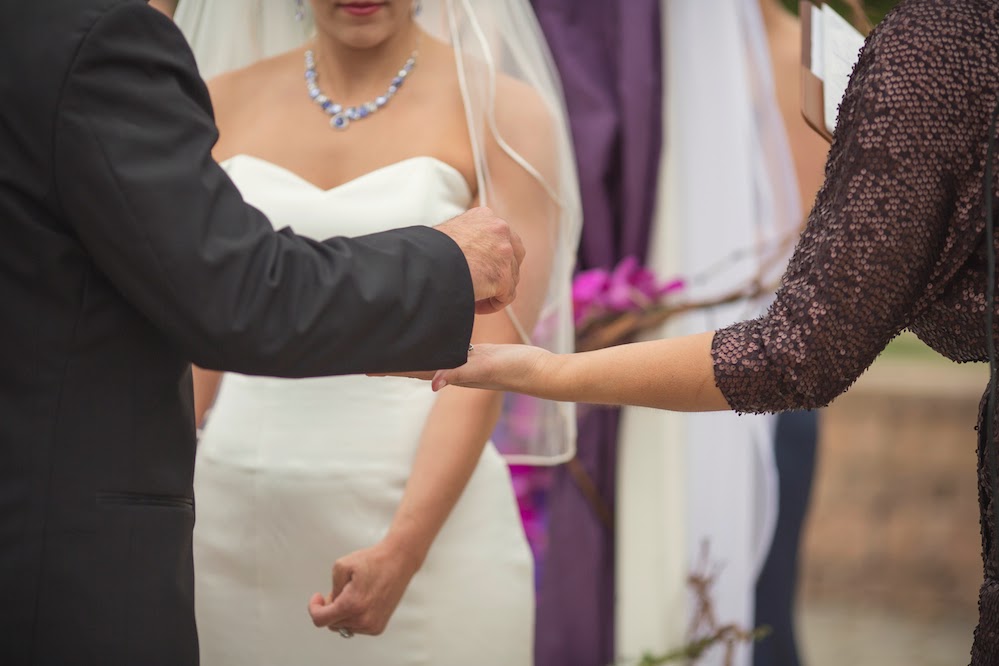 Throughout the years, Lori + Erman have continued to find ways to impress and excite each other as they’ve bonded over many shared interests, travelled to and hiked in exotic lands and enthusiastically rooted for the Philadelphia Fliers, Penn State and the Chicago Bears together. They continue to bring out the best of each other as they grow deeper in love.

On the fifth Anniversary of their fateful meeting, Erman and Lori celebrated with a New Year getaway at Woodloch Lodge. Their day was perfect--they adventured out on their first snowshoe hike and enjoyed the scenery of the wintery mountain lake landscape, took naps and relaxed in the hot tub. Over dinner they reminisced about their favorite moments spent together and what they were looking forward to in the future. As the clock slowly approached midnight, they played the A-Z game, listing all the favorite places they had been to together.

Finally, as the count down drew near, Lori and Erman stood up from their game to hug and kiss. Lori noticed that Erman was only embracing her with one arm, so she stepped back to see what was wrong. There, at the start of this new year, Erman went down on both knees, opened a ring box containing the most brilliant diamond ring in all the land, and asked Lori to marry him. Surprised and overwhelmed, she said “Yes!” 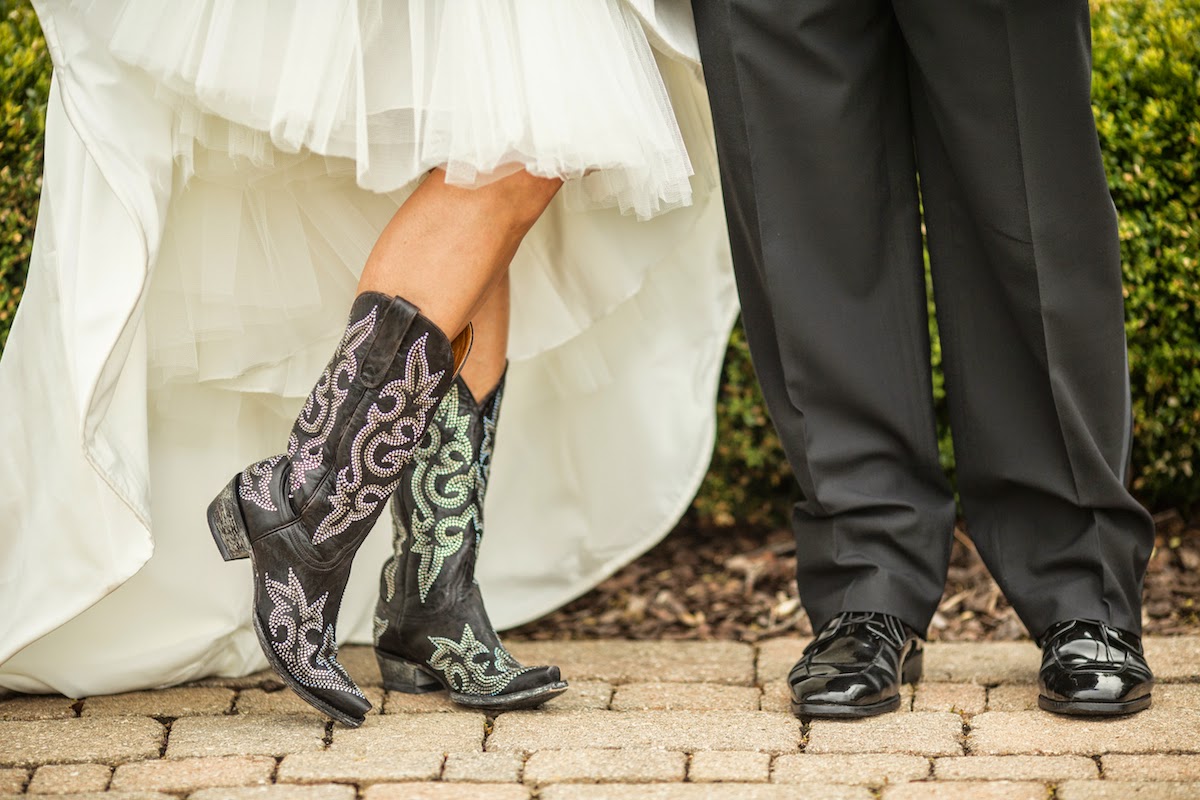 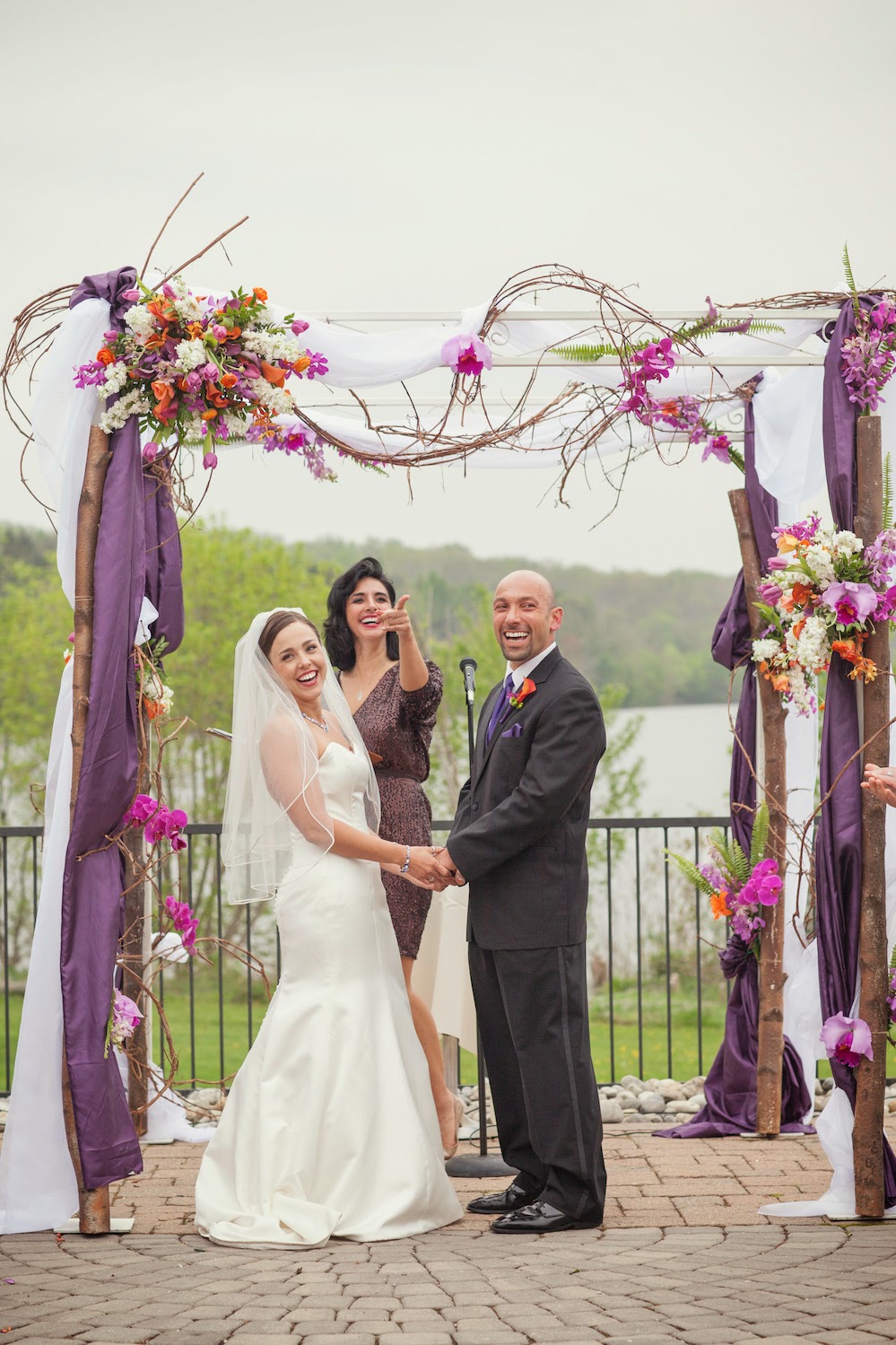 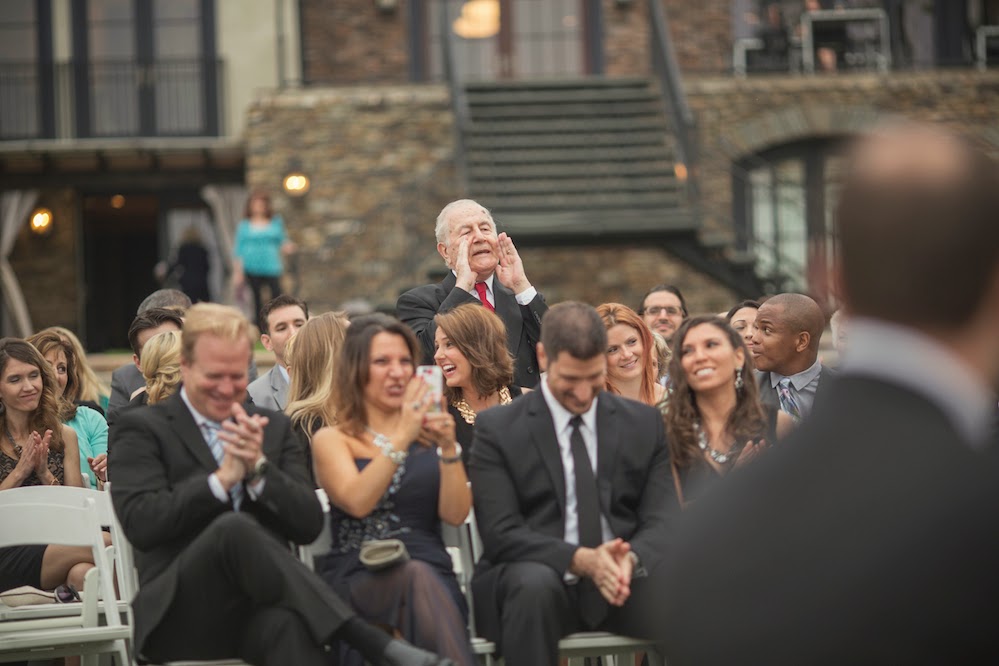 When they returned to their room, a banner that read “Lori and Erman forever” had already been hung to announce their plans to live the rest of their lives as husband and wife. And it is this intention, to be joined together in marriage that brings us to this moment…"
We all had so much fun working with the Douglas Benedict Photography, who photographed so many bright moments on the way to Lori + Erman's happily ever after.

Amber + Joe, All The Little Things 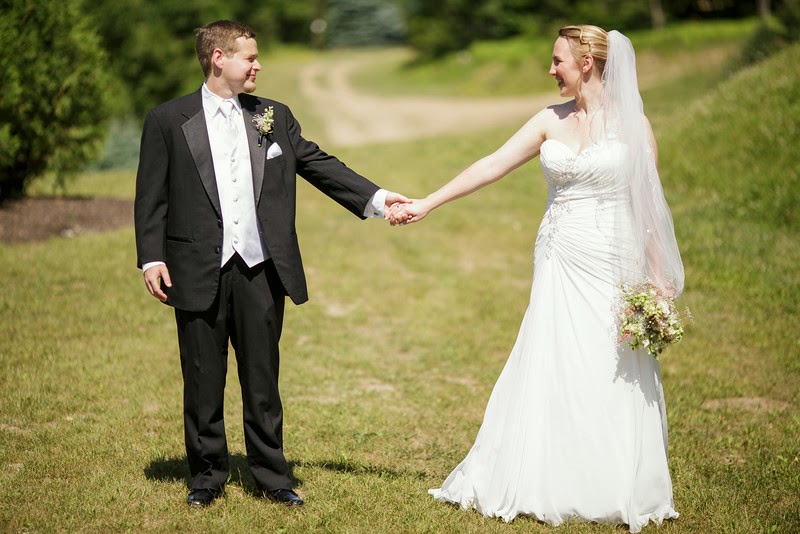 Amber and Joe, scientists who first met at a local university in 2010, celebrated the start of their married life, surrounded by their family and friends this summer at the scenic Blue Mountain Ski Resort.
LOVE STORY Not long after Amber moved to the area, she was invited to work happy hour-- it was there that she met Joe for the first time. Over drinks, Joe and Amber gravitated to each other, discovering they had a lot in common. Still thinking of Amber, the next day, Joe dropped off a book they had discussed the night before, and being friendly, offered to show her around town.

After that first meeting, Joe and Amber started spending more time together, they’d go running together or grab a couple drinks after work. Joe says, “I guess I started thinking to myself that these were ‘dates’ when on one occasion, I went to ask Amber to happy hour, something we had done several times before, but as I walked to her office, I suddenly realized I was nervous. I reconsidered, turned around, and walked back to my office…at least part of the way,” he remembers, “I think I turned back around two or three times and paced a few steps before I decided to finally knock on her door and ask if she wanted to get a drink.” Amber had plans to go for a run later that evening, so she agreed to go out, but just for an hour.

That night, one hour turned into many. Joe and Amber bonded over all they had in common: family backgrounds, professional interests and worldviews. Conversation flowed easily late into the evening, Joe says “they clicked” and Amber never went for that run. 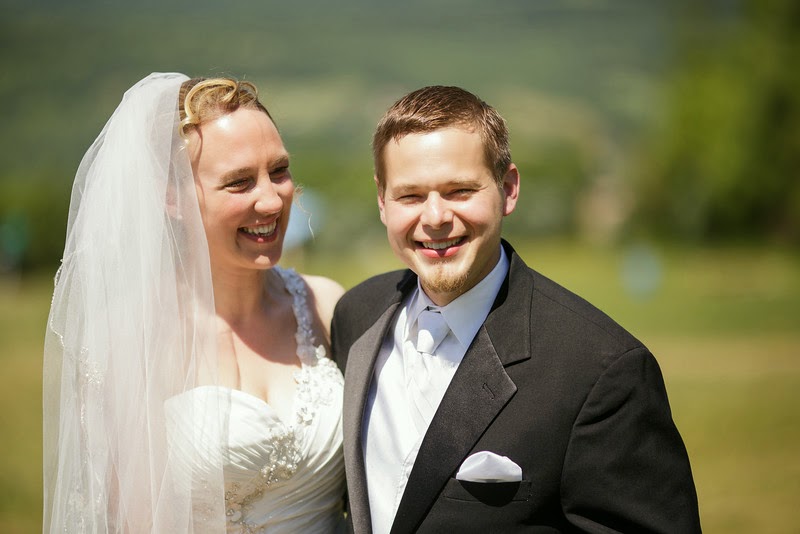 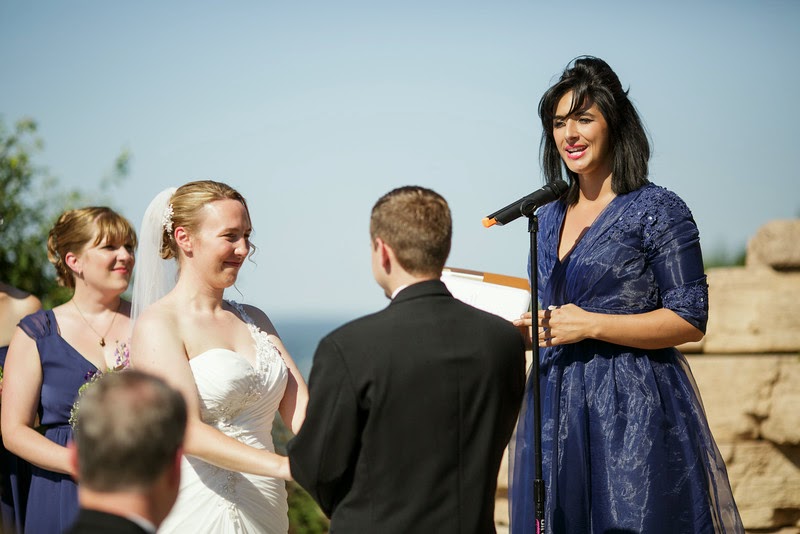 In the coming days that followed, as these two spent more time together, Joe says, “it became increasingly clear to me that Amber was someone very special…I was amazed at how easy it was to spend time with her…being with Amber felt like the most natural thing in the world.”

Amber says, “When it came down to it, I knew he was worth the chance. I had never experienced the kind of connection that we had.” At the end of the night, as they were saying their goodbyes in the parking lot, Joe leaned in and kissed Amber. From that night on, Joe and Amber spent as much time together as they could, and never ran out of things to talk about.
Both Joe and Amber realized that their feelings for each other were quickly deepening. It wasn’t long before Joe told Amber that he loved her, and Amber said she felt the same way. He says, “we both fell hard and fast. Once those words were spoken, we started making plans for a future together.”

Amber and Joe hardly had the chance to settle into life together before Joe’s work called him to Minnesota for a research position. They were forced to decide how to handle a long distance relationship. “Never wavering in their commitment to make their relationship work”, they tried to see each other at least twice a month—taking turns on who would make the weekend flights between Minnesota and Pennsylvania. 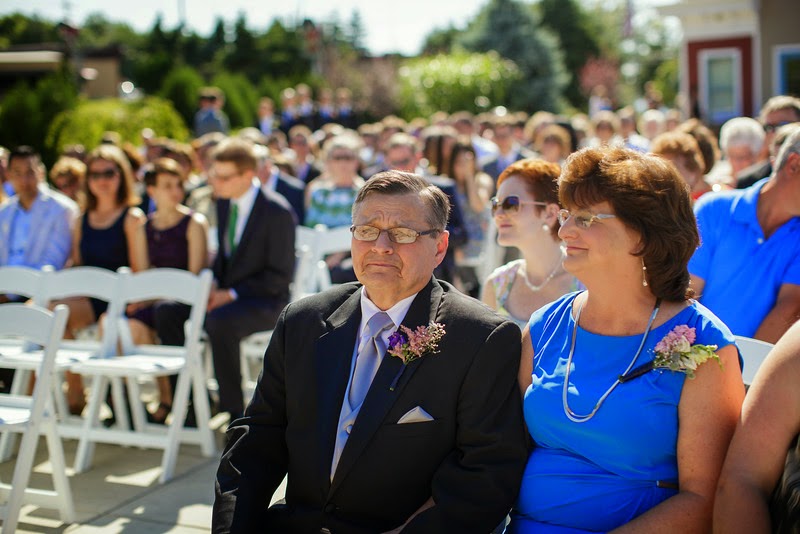 Amber remembers that they talked everyday too. They used Facetime and Skype to greet each other in the morning, and send kisses to each other at night.

Sometimes they would even leave Facetime or Skype on in the background when they were at home. Amber says, “it just made it seem like we were in the same room, even if we weren’t even in the same state…we’d have Skype dates where we would cook dinner at the same time, and then sit down to eat with each other.” They’d even watch movies together, trying to synchronize the start times so they could react to the same scenes together. “It wasn’t always easy,” Amber says, “and we missed each other a lot, but we did a pretty good job of making the best of the situation.”

After living apart for six months, Joe found a job back in Pennsylvania. Since then, they haven’t been apart.
About a year after returning home, Amber and Joe went out for dinner at the same restaurant where they shared their first kiss and their relationship began. On the way out, they talked about how difficult it was to imagine life without each other, and discussed what they wanted for the future. At that moment, Joe got down on his knee and asked Amber to marry him. Amber said, “Of course I will!”
To demonstrate their commitment to nurture their bonds and invest in their family, the couple planted a flowering dogwood tree in their wedding ceremony. Around the roots of this tree, they used soil brought from their childhood family homes in Michigan and Pennsylvania.
Amber says that, “I don’t think romance requires one grand gesture after another. For me it is all about the little things and Joe does so many little things everyday to show me how much he loves me… He makes all the hard and bad days easier and all the good days so much better.”

As a grande finale to their ceremony, seven friends were selected to each bestow a special blessing upon Joe and Amber--guests enthusiastically tossed rice and lavender as Amber and Joe took their first seven meaning-filled steps into their married life together. 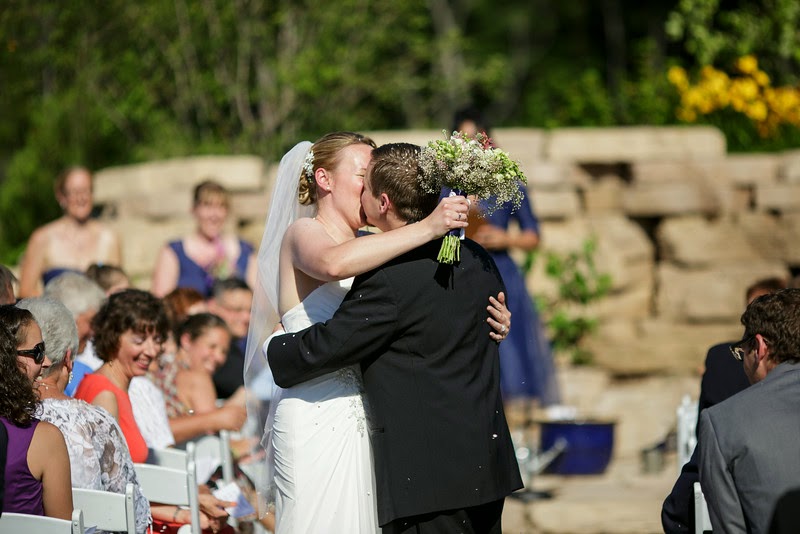 Thank you to Denise Weaver for sharing these sweet photographs of Joe and Amber's thoughtful wedding.